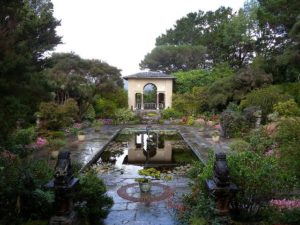 Garnish Island is located in the sheltered harbour of Glengarriff in Bantry Bay, on The Wild Atlantic Way. The boat pier to Garnish is a short walk from Casey's Hotel. Garnish is world renowned for its gardens which are laid out in beautiful walks and it has some stunning specimen plants which are rare in this climate.

The garden was designed by Harold Peto, (1854–1933), for its owner John Annan Bryce, (1841–1923), a native of Belfast, who, with his wife Violet, purchased the island from the War Office in 1910. Violet died in 1939 and their son Roland bequeathed the island to the Irish nation in 1953. It was taken over and is still maintained by the Office of Public Works. Renowned for its gardens and architecture (a mansion was designed by Peto but was never built), the island has played host to writers including George Bernard Shaw and George William Russell.

There is a restored Martello tower on the island dating from the time of the Napoleonic Wars. The Garnish tower, like others in Cork, but unlike other Irish Martello towers, has a straight cylindrical shape that does not splay out at its base

Garnish Island extends to 15 hectares (37 acres) and is renowned for its gardens which flourish in the mild humid micro-climate of Glengarriff harbour assisted by a mainly pine shelter belt. Structures include a clock tower, a Grecian temple, a Martello Tower, and an Italian casita.